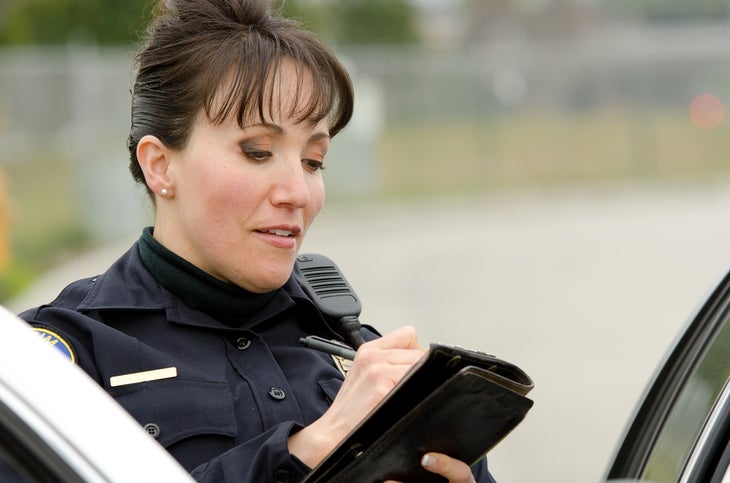 My running partner and I were mid-chat during our long run this weekend when we were stopped by a police officer. Our offense? Crossing the street when the light was red. Thankfully, he let us off with a warning, but it got me thinking — what else am I doing that’s illegal? Everything varies by state and city, but here are some interesting laws you might be breaking (unknowingly) on your run:

Tossing your empty Gu packet or water bottle in someone’s trashcan (or on the ground): Again, this law varies by city, but in many cases you can’t throw out your trash in someone else’s bin. According to Seattle 911, a police and crime blog, “No person shall throw, discard, or deposit litter on any street, sidewalk, or other public property within the City, on any private property within the City and not owned by the person, or in or upon any body of water within the jurisdiction of the City, whether from a vehicle or otherwise.”

Public urination: Urinating in public is illegal in every state. According to CriminalDefenseLawyer.com, violations of local ordinances are generally punishable by fines, community service or both. Local governments set the amounts of the fines. A typical fine might be from $50 to $500, depending on the circumstances.

Spitting: Think twice before hocking that loogie. According to the Massachusessets Legislature website, “Whoever expectorates or spits upon any public sidewalk, or upon any place used exclusively or principally by pedestrians, or, except in receptacles provided for the purpose, in or upon any part of any city … shall be punished by a fine of not more than twenty dollars.”

Running in the street when there are sidewalks: In Washington, D.C., “Where sidewalks are provided, it shall be unlawful for any pedestrian to walk along and upon an adjacent roadway,” BeStreetSmart.net reports.

Running at night (if you’re younger than 18): In many cities, there are curfew laws in place to “prohibit or limit your right to be out in public at certain times and are intended to maintain a certain level of order and safety in public spaces,” FindLaw reports. Most curfew laws apply only to those under the age of 18, while other curfew laws are enacted temporarily in response to a natural disaster or civil disturbance.

Did we leave anything out? Let us know. Email me at natalie.diblasio@runhaven.com

Running With My Daughter Allows Her to See Who I Am