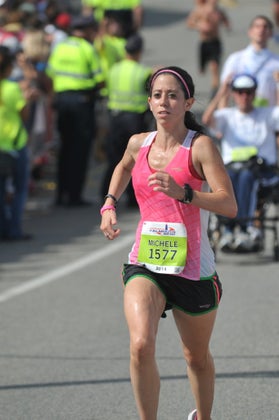 There are a ton of resources available if you are looking to get faster—websites, books, and even other runners. But before you can start incorporating some of the workouts into your training, the first thing you probably want to do is become familiar with the lingo, which can be a bit overwhelming if you are newer to the sport. I didn’t understand what a lot of the terminology was until I had already been running for years, but once I did, I was much more open to adding them into my training.

Below are some of the most common types of speedwork. There are endless variations for each (and you can even get crazy and combine a few of them!), but these will give you a good foundation from which you can build upon.

Fartlek means “speed play” in Swedish and involves short periods of fast running followed by short periods of slower running. There’s often no set distance or pace. You can even do it without a watch or Garmin. Fartleks are a great way to get your feet wet with speedwork since it’s a fun, creative, and less structured form of interval workout. Some examples of fartleks:

Surges are short bursts of fast running in the middle (or end) of any type of run. These usually take place during easy or long runs. Surges last anywhere from 30 seconds to a couple of minutes. Runners should target a comfortably hard pace (think 5k-10k pace), followed by short periods of easy-paced running. Surges are a great way to inject some faster running into your workout while also helping to break up the monotony of an easy or long run. Some examples:

A fast finish is simply that—finishing the run fast. It is one of the easiest ways to incorporate faster running into your training while preparing your body and mind to finish races fast. You can do this on easy runs or long runs, and it won’t leave you exhausted or wiped for the next day’s run. According to Matt Fittzgerald, “A habit of indulging in controlled fast finishes whenever you please will make you a little fitter over time by adding a bit of extra work—and fun—into your training.”

The basic idea of a progression run is to gradually pick up the pace as you run—so you want to start slow and end fast. A progression run typically doesn’t have set paces. It’s a very fluid workout (although advanced runners may have specific paces to hit). Progression runs are my favorite type of run because they force me to start slow and easy, and to take cues from my body. And it’s a huge confidence booster—there is nothing as satisfying as finishing a run (regardless of distance) feeling fast, strong and in control. While there a ton of ways to do a progression run, two of the more common forms are:

According to Jack Daniels, Ph.D, author of Daniel’s Running Formula, a tempo run is “…nothing more than 20 minutes of steady running at threshold pace.” Also known as an anaerobic threshold (AT) run or lactate-threshold run, a tempo run should feel hard—but not too hard—and could be maintained for about an hour in a race. Tempo or threshold runs aim to increase the speed you can sustain for a prolonged period of time, while increasing the time you can sustain that relatively fast pace. Common types of tempo workouts are:

Intervals consist of repeated short segments of fast running separated by slow jogging or complete rest. The intervals allow you to run much faster than you usually do, adapting your body to higher demands and your leg muscles to faster turnover. Over time, you become more physiologically efficient. Intervals increase your overall speed. Examples include (more can be found here):

If you are unsure of what paces to target for some of the workouts, there are multiple websites which give you a general range for specific workouts based on your recent race times. Two of my favorites include: Maximum Performance Racing and McMillan Running Calculator.

Ramp Up Your Race Fitness With These Four Progression Runs

The Benefits of Speeding Up Recovery in Interval Workouts

How Elle Purrier Trained to Run the American 2-Mile Record