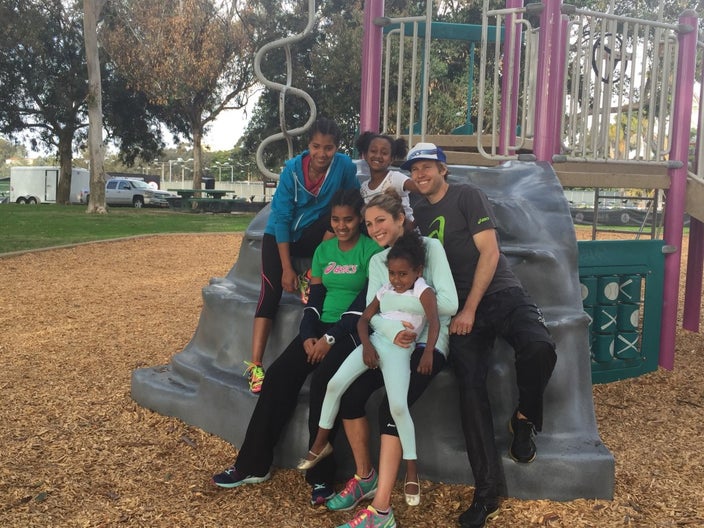 Sara Hall, wife to fellow marathoner Ryan Hall, who recently announced his retirement, and now mom to four adopted sisters, made her much-anticipated marathon debut at the LA Marathon last year—and it did not go as planned. She missed top-20 placement on an unseasonably warm day, walking away with a 2:48. Then, later that fall, Hall returned to 26.2 in Chicago, trying again to hit the standard to qualify for the Olympic Trials in Los Angeles. She blew the race out of the water, running a 2:31:14, finishing 10th. She will toe the line now with one of the top times at the trials; although one of the less experienced marathoners, her toughness as a cross-country runner will play well on the looped course. We asked her a few questions about running, being a mom and what might happen in LA:

Women’s Running: Your debut at the 2015 LA Marathon last year didn’t go so well, but you came back and totally killed it in Chicago! How have you taken lessons from both of those events and integrated them into your training for the trials?
Sara Hall: Thank you! The main thing that I learned in LA that I need to get better at racing in the heat and callousing my legs to steep downhills. We were actually in LA the same weekend as the trials last year, and it was 85 degrees. So I have kept that in mind in my preparations that heat could be a factor and tried to overdress when appropriate to offset the winter weather.  Fortunately the course is flat, though I have still worked on callousing my legs by running in more minimal shoes and on firmer surfaces on a daily basis. Chicago fortunately was a much less challenging course and conditions, so I learned in that race that I do enjoy the marathon as I thought I would, and it encouraged me to do the trials and see how much more was there.

WR: Your family got much bigger last year! What has been the biggest running/life adjustment for you going from just Ryan and you to adopting four kids?
SH: It has been an adjustment, but not nearly as drastic of one as I imagined thus far! The girls have adjusted really remarkably to the new culture and lifestyle, and so that has been the biggest factor that has made life easy. Things are a bit busier juggling their schedule alongside ours, and I don’t always have the freedom to veg out after a long workout as I would have before, but they have brought so much joy to my life, beyond what I could have imagined. I think I have laughed more in the last four months than I have the last 10 years! They are full of life and every day is a beautiful challenging adventure of figuring out how to love them well and see them thrive. I definitely don’t sit around worrying about the race, I have plenty of positive distraction from them.

WR: What’s the craziest thing you’ve seen on any of your training runs?
SH: I’m not sure if you’re referring to crazy training feats or something abnormal. I would say abnormal would be coming across someone trying to steal our stand-up paddleboards recently! Fortunately I defused it well.

WR: Why should everyday runners tune into the trials on Feb. 13?
SH: The marathon is truly a beautiful work of art to watch, whether or not you follow elite running or not. There is a lot of time where some inspiring drama can unfold, and it is hard to think of a more grueling athletic event out there where people are pouring every ounce of themselves out to be their best on the day.

WR: There’s been much chatter about the field and the “favorites” and the times that will need to be run to make the 2016 team—do you use this as fuel for your own training or tune it out?
SH: I personally try to shield myself from as much media as possible and focus on getting myself in the best shape of my life. I can’t control how other people are on the day, so I don’t waste energy thinking about it or get in my head and just focus on being the best “me” I can be. I know that I am new to the event and not a favorite, and I kind of like that position going in!

Sara Hall and the 2021 Olympic Trials: “I Don’t Want the Weight of the Day to Steal the Joy”

Sara Hall Will Chase the American Record at 2021 Chicago Marathon