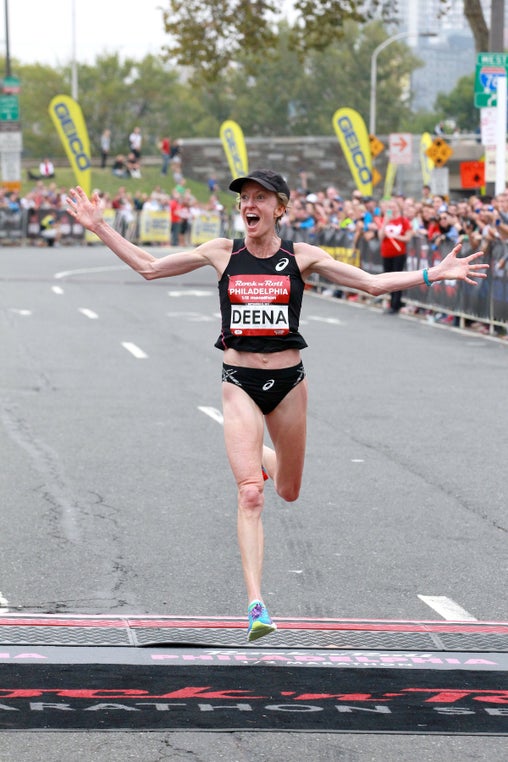 American marathon record holder and Olympic bronze medalist Deena Kastor is one of the most decorated runners of all time. In 2014, she broke an American record for every race she entered in the calendar year as a masters runner, as well as the world masters record in the half marathon in Philly (pictured above). In 2015, she broke the American masters marathon record at the Chicago Marathon, running an impressive 2:27:47. She’s also a two-time national champion in cross country, one of the most rigorous and gritty forms of running—and one of her proudest moments. She led a team of athletes in Mammoth Lakes as they prepared for Feb. 13 at the Olympic Trials Marathon in Los Angeles; Kastor opted to race at the trials originally but eventually pulled out. However, her qualifying time puts her towards the top of the athlete roster. We asked her a few questions:

Women’s Running: You’ve said that you might as well toe the line since you’ve been putting in the work with your athletes—what does that mean for your race goals?
Deena Kastor: I have enjoyed getting my teammates ready for the trials. I have no race strategy yet, but once we are a couple weeks out from the race, my coach [husband Andrew Kastor] will devise a race plan for all of us in the Mammoth Track Club. My motive in training is to see my teammates cultivate a belief in their training and our goal on race day is to execute to the best of our strengths to make the Olympic team.

WR: What’s the craziest thing you’ve seen on the run with your athletes?
DK: We are motivated by the views of the snow-capped 14,000-foot peaks surrounding us. I’m amazed that Mammoth can be in the midst of a big winter and we still have access to our favorite trails and training locations. I get fired up when I see a bald eagle on the run and a different kind of giddy when my teammate doesn’t venture far enough into the bushes to pee.

WR: This is potentially the deepest field the Olympic trials has ever seen—in your opinion as a decorated marathoner, what does that say about the overall state of women’s running in the U.S.?
DK: On both men’s and women’s marathon trials, we are seeing such depth. To know there are about eight women and equal number of men speaks volumes on the depth of American distance running, but to know in an Olympic year there are also upsets and dark horses that emerge make this the most exciting Olympic Trials on record.

WR: If you had one song stuck in your head for the entire race, what would you hoped it would be and why?
DK: Matt Darey’s “Beautiful Day” has long been a favorite of mine. (Weird youtube, but you’ll get the song!) “The future, I’m not afraid of what it holds. Imagine the road ahead is paved in gold!” is one of the lyrics—powerful.

WR: If you had to choose a single moment in your career that took your breath away the most, what would it be?
DK: My first national championship in cross country. It instilled in me a belief that I was following the path I was intended. It was a win, but it made me hungry to continue growing in this sport.