We’ve all seen the massive publicity that Alison Desir’s #4women4allwomen campaign has garnered as we quickly approach Inauguration Day. The Harlem Run founder had a grand goal of running from Harlem, N.Y. to Washington, D.C., in time to participate in the Women’s March this weekend. The cause? To raise awareness and funds for Planned Parenthood and all the services they provide women. With the future of the nonprofit hanging in the balance as the nation waits to see what happens next with President-elect Donald Trump, Desir wanted to take a stand for all women, protecting the very rights that so many feel are threatened and will be threatened during the next four years.

But how was the idea born?

“I was participating in the NYRR midnight run and had the privilege of taking over [@womensrunningmagazine Instagram] page on New Year’s Eve. I remember posting about 2016 and asking others to share their reflections on the year and their goals for 2017, but I honestly hadn’t done it too deeply myself at the time; I was just excited to be running and to be sharing my thoughts and those of other women on your Instagram page,” recalls Desir. “On Jan. 1, I realized that I hadn’t actually shared my own. I shared a post on my account, and one of my goals was to ‘create more spaces for women to share their stories (use my platform for social change)’ but I hadn’t thought concretely about what that meant.”

Upon thinking about what 2016 meant to her—a year where she lost her father—Desir realized, “while on many level 2016 was amazing, there were also so many devastating blows…I wish I could have more time with my dad. There is so much more that I could have shared with him and learned from him but I always assumed I had more time.”

Ahead of the election, Desir worked where she could to help Democratic candidate Hillary Clinton’s campaign but again assumed she would have more time to support after she was elected into office—which obviously did not happen. 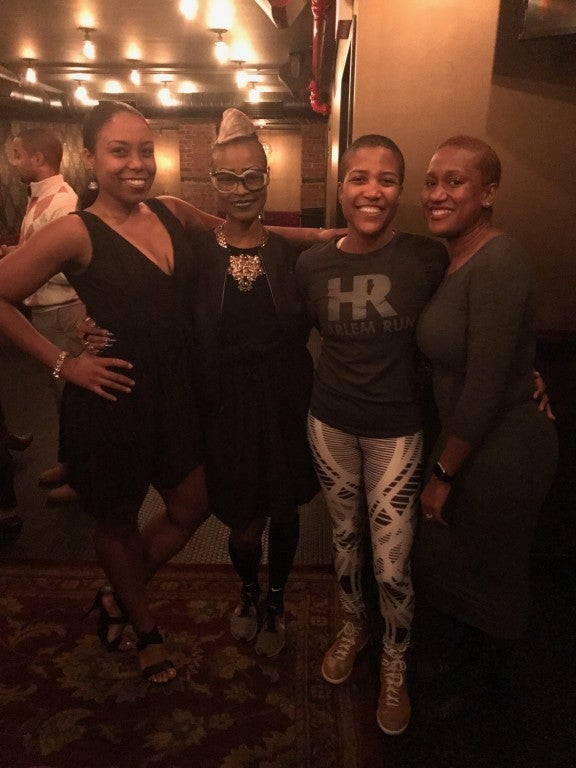 Quickly Desir had three other runners join her cause: Talisa Hayes, Kim Rodrigues and Marquita Francique. Desir calls them “fellow fearless leaders in the New York running community.” Hayes has run 19 ultramarathons (Desir called her first), and Rodrigues and Francique approached Desir about participating shortly after.

Of course every social movement calling for attention and change isn’t without people in disagreement, as Women’s Running has already experienced in response to our Solidarity Run on Jan. 19. Desir believes the backlash is forthcoming

“I haven’t yet received any personal backlash but I imagine that it is only a matter of time. I recognize that this is a very sensitive topic for people on both sides of the line—but I am luckily surrounded by an immense amount of support,” says Desir. “In the meantime, however, all I have received is praise and well wishes and thanks from women and men all over the country, and world, who are energized by this idea that we CAN do something. And that running can be and is, in this case, a political act.”

“I am hopeful that this run will continue to energize women everywhere to peacefully push for our rights and those of others in marginalized communities,” Desir says of her ultimate goal for 4 Women 4 All Women. “If one woman’s crazy idea can create a movement, there are many other women out there who can also contribute to meaningful change and ensure that Planned Parenthood is here to stay!  I hope that the future president will see this run, the Women’s March, and every other act to preserve our rights as a signal that he must reconsider his own ideas and those around him.”