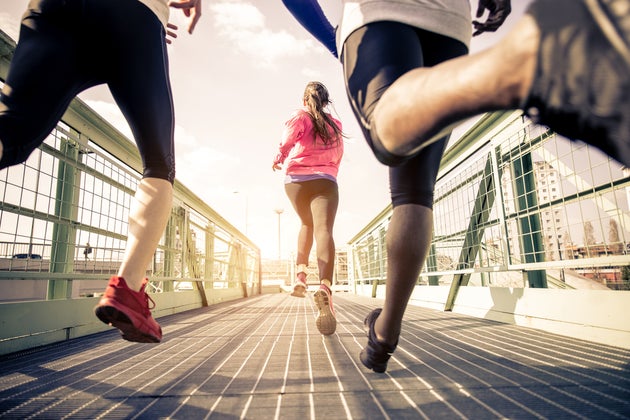 While runners are some of the friendliest, most welcoming people around, there are still occasional conflicts between different types of runners. Yes, even these mild-mannered athletes have differences that sometimes divide them. But at the end of the day, it doesn’t matter how, where, or when we run; all that matters is why: Because we all love running.

So with that in mind, it’s high time we squash these silly runner feuds once and for all.

Many runners are adamant that rain or shine, running outside is the only way to go, while some more fair-weather runners swear by the treadmill and the reliable climate-control of the thermostat. Outdoor runners may sometimes look down at the treadmill as less-than-challenging, and gym rats may scoff at the lack of predictability the great outdoor provides. But at the end of the day, all that matter is that you get your miles in, not where you do it. So run hill sprints in the rain or enjoy some TV during your long run; just go out (or in) there and get it done.

While many runners shake their heads at the idea of putting on even mascara before a workout, there are plenty of others who prefer to be completely made up during their miles and shudder at the thought of being naked from the neck up. The truth is, it doesn’t matter if you go fresh-faced or full-foundation since everyone looks beautiful when they run. Just do what makes you feel most confident and comfortable because after all, running is all about making you feel your very best.

Thanks to modern technology, plenty of runners have become full-fledged gearheads. From watches and fitness trackers to apps and tech-enhanced shoes, many runners are committed to the countless ways to track, measure, and improve your every stride. On the opposite end of the spectrum, a group of runners prefer to run au natural in the tech department; they like to judge their pace and mileage by feel and choose their sneakers for comfort, not compatibility with an app, and frankly think all those gadgets distract from what running is supposed to be about. However, whether you can’t leave the house without charging three different batteries or you head out without even a cell phone, it doesn’t matter—as long as you have a way to get home if you get lost, you’re good!

“Real” Runners vs Other Runners

Ah, yes. The never-ending battle about what a “real” runner should be. This one encompasses a lot: slow vs fast runners, chatty vs quiet runners, short vs long distance runners, casual vs serious runners, and on and on and on. It’s been said a million times, but once and for all can we just agree that if you run, you’re a real runner? How fast or far you run, how often you run or race, how loud you listen to music or talk or even breathe, none of it matters. So run however the hell you want and know that you’re in great company with all kinds of awesome runners.