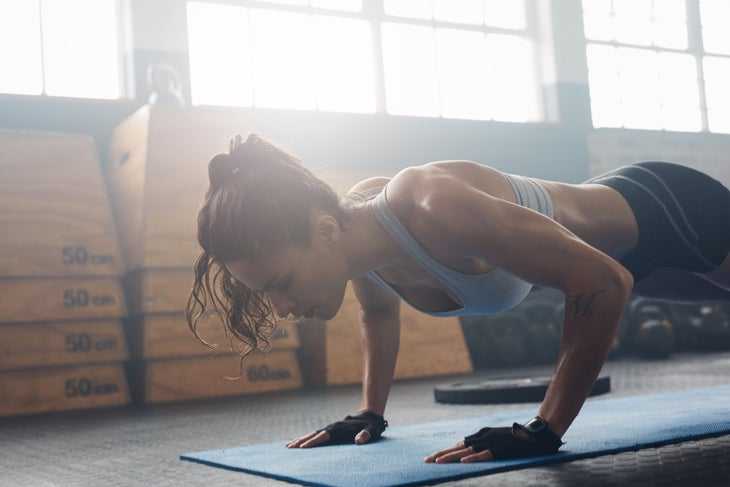 The 22 Challenge is a global movement started by veterans and executed by both civilians and military members. After learning that an average of 22 veterans are killed by suicide every day, often stemming from severe PTSD (post-traumatic stress disorder), Honor Courage Commitment, Inc., founded the #22Kill movement to remember and honor those lost at war—or due to the aftermath.

The challenge? To do 22 pushups for 22 days, or even 22 weeks, to show support for veteran empowerment programs, to help veterans maximize their talents and understand their value outside of the military, and to demonstrate respect and admiration for those still serving. In addition, the program also gives support to other veteran organizations, treatment centers and community events and projects. In a similar fashion to that unavoidable Ice Bucket Challenge for ALS awareness, the 22 Push-Up Challenge is catching wind to the path of viral; people across the country are all pushing up together to support the troops. Then they are tagging friends on each day to do the same, or donate to the cause.

Related: Mastering The Push Up In 4 Steps

“It’s hard to believe that 22 vets a day are committing suicide, a startling statistic,” said Dana Allen, who lives in Washington, D.C. and recently participated in the 22 Challenge after being nominated by a friend. “If getting the message out helps get our vets the help they need, I think 22 pushups a day is great way to spread the word.” Allen, who is a former Women’s Running colleague, also nominated the magazine’s art director, Erin Douglas. However, Douglas had more motivation to drop and give the world 22 beyond her nomination.

“I also wanted to honor my two brothers,” she said. “Both are in the military and one has been to war. Doing pushups is the least I could do to honor my brothers and others who fight for our freedom.”

For those who wish to join the movement and support those who serve us, the #22Kill website explains the whole process. First, record a video of you doing your 22 pushups, upload the video to you social media platforms, add use the appropriate hashtags (#22kill) and share the video! The idea is to have the campaign add up to 22 million pushups, which means one million willing participants need to get buff. But who’s complaining about a little philanthropic reason to work out?

“The good news is that in addition to getting the word out about this important issue, Erin and I are also benefiting by getting stronger each day.” Said Allen. “Heck, I might even continue the daily pushups after the official challenge is complete!”

Recently, popular celebrities have been nominated and called out others to join in on raising awareness as well. Chris Pratt and Anna Faris, Scott Eastwood and Ludacris (who announced his acceptance of Eastwood’s nom during a show) have all posted videos supporting the cause.