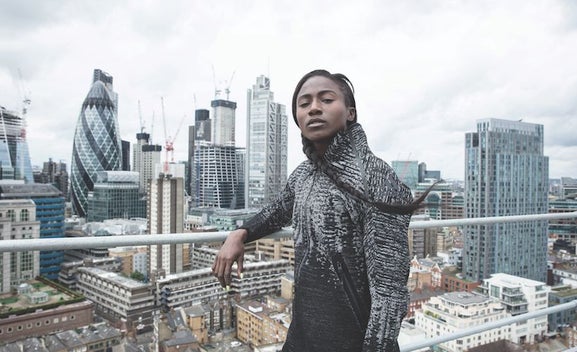 Tori Bowie Leans For The Win

Growing up in Mississippi, the majority of sports talk and interest revolved around high school and college football. The state doesn’t have any major sports franchises either, so it was rare to feel any connection to elite athletes, much less track and field stars. So it’s always been exciting for me to see a fellow Mississippian do well on the world stage. The 2016 Olympics was especially thrilling because I got to see Mississippian Tori Bowie reach the pinnacle of achievement in sports, returning to the Magnolia State with three Olympic medals, including gold. This summer managed to top that joyous moment, though, as I was able to witness Tori become the fastest woman in the world as she clinched the gold in the 100 meters at the IAAF World Championships in London this August. It felt like I was in a dream when I found myself sitting at the same table with Tori shortly after her win, talking about how we both grew up in the same county and had played on some of the same athletic fields. The fact that the fastest female sprinter in the world and I had something in common both humbled and inspired me. That’s what I love about sport—its unwavering ability to motivate people to push themselves to greatness, all while forging connections with people close to home and halfway around the globe. —Rebecca Warren, editor in chief

In August, two Austin, Texas, runners—Allison Macsas and Mallory Brooks—set a new women’s record for the Wonderland Trail, the 93-mile trail that circumnavigates Mount Rainier in Washington. They finished the route, which includes 22,000 feet of elevation gain and loss and a difficult river crossing, in just more than 29 hours. And they did it completely unsupported—as in they received no physical or material assistance and carried everything they needed on their backs. The new record set by these badass athletes is just one story of countless we’ve seen in the last year of women runners pushing boundaries and using the sport as a platform for new adventures, something we admire and aspire to in our own running. —Bethany Mavis, managing editor

In her marathon debut, Jordan Hasay not only got herself on the podium at the Boston Marathon, but she also had the fastest 26.2 debut time ever for an American woman, finishing in 2 hours, 23 minutes flat. Following the tragedy of her mother’s death just months prior, Hasay was so gracious in pre-race interviews, sharing that she runs in honor of her mom. Seeing the former high-school phenom, with that signature long, blonde ponytail, put on such a tremendous show in Boston was an incredible moment for her, for fans and for American distance running in general. —Caitlyn Pilkington, former Women’s Running web editor

This year, Women’s Running is proud of the strength we’ve seen in runners who stood strong against the Internet trolls who make us seriously question the good in humanity. In May, our own blogger and freelancer Mirna Valerio issued a response to an email that called her a liar and a fraud, declaring, “You cannot destroy me, my success, my happiness, or my wholeness. I am too strong for that, and so is my running community.” Cheers to that, Mirna—we’ve got your back. During the summer, breast cancer survivor and running coach Laurah Lukin was tagged in a mid-race photo on Facebook that caused a man to comment, “No wonder joggers get raped.” Resisting the instinct to respond angrily (or to point out that male competitors often wear tight-fitting shorts or run bare-chested), Laurah instead composed a blog post in which she questioned why apparel is still thought to play a role in advances by sexual predators. “NOBODY asks to be raped,” she reminded her commentator. “The length of my shorts is not an indication of interest, invitation or consent.” It’s appalling that Mirna, Laurah and runners like them—that is to say, female—still face this kind of harassment in 2017. Yet we’re proud of the massive displays of support they received for their messages of steadfast strength. Way to go, ladies—you’ve inspired us tremendously this year! —Meghan Roos, associate web editor

Runner Responds To Horrific Comment Regarding Her Shorts In Photo

It Was The Jordan Hasay Debut Show At The Boston Marathon