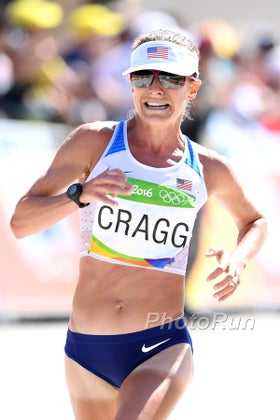 After winning the women’s Olympic Marathon Trials in epic fashion in 2016, then placing 9th in the women’s marathon at the Olympic Games in Rio, Amy Cragg still thinks she has a lot to learn about running marathons.

“I just kind of jumped into the marathon and didn’t necessarily take the right steps,” said Cragg. “So this year will be a learning year and I will go back to those steps and hopefully become a better marathoner.”

It’s exactly this kind of thinking that makes Cragg a champion—and perhaps we have only witnessed a glimpse of what her true potential is.

Alongside Olympic teammates Shalane Flanagan and Desi Linden, the trio set a record in Rio, all placing within the top 10 at the 2016 Olympics, something never done before by American women runners.

Cragg gushes a bit when talking about Shalane and how, although winning the Olympic Trials Marathon in Los Angeles was “the best moment of my career,” having Flanagan there “made it that much better!”

Cragg and Flanagan still train together, although Flanagan has her sights set on running the Boston Marathon this April (as does Linden). Cragg is taking her learning year seriously and opted out of the iconic marathon. Instead she will focus on getting faster in the 10K which she hopes will translate into a faster final 5K in the marathon distance.

In addition to training and racing seriously, Cragg also takes any sign of injury very seriously which is why she just renewed her partnership with ZAMST, the bracing and support company she has been with since 2013.

“The brace I use is the AT1 for an old achilles injury I suffered in 2011. It [my achilles] has stayed healthy since I started using the brace, which is a real testament.”

Cragg’s advice to any runner dealing with an injury is to “always pay attention to your body and find a system that works for you. Pain is information your body is giving you so use it.” Cragg uses massage, foam rolling and regular appointments with her chiropractor as her ongoing injury prevention system and added, “When an injury happens—attack it!”

Cragg promises to attack 2017 but is not revealing any goal races at this time saying “of course I have my bucket list of races but, for now, I’m focusing on learning as much as I can.”