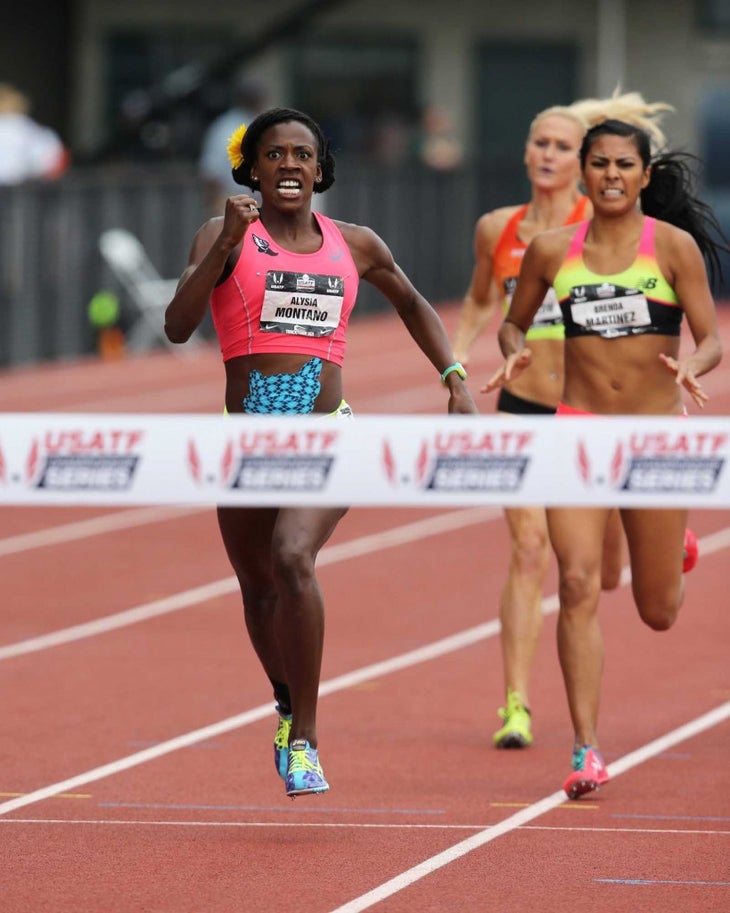 1. Alysia Montaño. The former Women’s Running cover runner made headlines when she competed at last year’s national championships at 34 weeks pregnant. Her performance sparked a larger conversation about women running and exercising while carrying a child, and she continues to inspire runner mothers everywhere after winning another national 800m title earlier this year, just 10 months after giving birth to daughter Linnea. Update as of 8/27: Montaño had a tragic moment during the 800m preliminary heats. She was clipped by another runner’s foot in the last 200m, causing her to lose her own footing and hit the ground. Unable to recover with a time good enough for the final, Montaño and USATF contested the fall and appealed the final decision to no avail. In a post-race interview, Montaño spoke on the overall race pace, saying that it wasn’t that hard and there’s no reason she shouldn’t be in the finals.

2. Emma Coburn. She has a serious chance at a medal for the U.S. in the 3,000 steeplechase in Beijing. The owner of four U.S. titles in the event, including the 2012 Olympic trials, as well as the American record, Coburn is poised to podium at worlds later this month. (Fun fact: While men competed in the steeplechase since 1896, the event was not available to women at the Olympics until 2008!) Update as of 8/24: After placing third in her preliminary heat, Coburn finished fifth in the finals, saying in a post-race interview that she could not quite recover from the final steeple jump. She finished first for the American women in the finals and ran a strong race up front for the entire 3000m.

3. Jenny Simpson. She became the first American woman in 28 years to win gold in the 1,500m at the 2011 world championships—a nice surprise! She lost her title at the last world championships in Moscow in 2013 and returns this year to hopefully re-claim that victory. Her friendly rivalry with fellow world qualifier Shannon Rowbury also promises to be a splendid dual race, perhaps resulting in two medals for the U.S. Update as of 8/27: Simpson finished fifth in her heat in the semi-finals, but another strange, unfortunate occurrence happened when Simpson lost her shoe in the last lap of the final. She finished 11th behind U.S. teammate Shannon Rowbury and gave a graceful post-race interview, stating that she already had more than she deserved in terms of medals and championships. She gave the cameraman a glimpse at her torn-up foot, saying that she had to make a decision to continue or stop, knowing she wasn’t going to place.

4. Allyson Felix. The sprinter will run the 400m instead of her usual 200m at this year’s world event; it will be the first time she doesn’t compete in 200m at worlds since 2001. She is currently the fastest 200m runner in the world and second-fastest among those who qualified in the 400m. She opted out of the 200m-400m double due to the proximity of each event, but when the Olympics roll around next summer, that might be a different story. Updated as of 8/27: Felix looked like a poised star winning her heat, making up a very quick stagger in barely 100 meters. In the semi-finals, she again won her heat, advancing to the final. The sprinting star took home her first world gold in the 400m, whipping around the track in a world leading time of 49.26! One of the most decorated female athletes in the world, Felix said it will be weird to watch the 200m final, which is her marquee event. We could see her run a 200m/400m double in Rio next year.

5. Shannon Rowbury. This won’t be the first time Rowbury and Simpson square off in the 1,500m. Rowbury edged out Simpson by less than a second earlier this year during a Diamond League meet, breaking Mary Decker’s American 1,500m record, with Simpson missing the mark by .18 seconds. She lost to Simpson at the U.S. championships, but the duo will see each other again in Beijing—one as a former world champ and one as the American record holder. Update as of 8/24: Rowbury has been the talk of the track, finishing fifth in her heat of the semi-finals. In thrilling 1,500m fashion, barely a second separated her from the first-place finisher. Rowbury ultimately finished 7th in the finals, where winner Genzebe Dibaba closed in an insane 1:57 final 800m.

6. Molly Huddle. The Providence, R.I., runner thrilled spectators at the B.A.A. 5K in April, where she crushed the 5K American road record. She’s had a monstrous career over the last year, including a victory at the NYC Half in March— her first half marathon and the first win for an American woman at that event. At the U.S. championships, her win over Shalane Flanagan in the 10,000m was her inaugural national title in that event. Update as of 8/27: The final meters separated Huddle from the bronze, losing the medal at the line to Infeld, exemplifying that track and field can be simultaneously uplifting and utterly heartbreaking.

7. Emily Infeld. A rising star, Infeld trains with Shalane Flanagan and finished third in the 10,000m at the U.S. championships, her highest finish on a national stage. She also holds an NCAA title in the 3,000m and will definitely add more titles to her resume in the coming years. Update as of 8/27: After 18 months of injury, Infeld was definitely an underdog story with her world medal accomplishment over Molly Huddle. She gave us a thrilling finish and is one to watch even more in the Olympic year.

8. Shalane Flanagan. America’s favorite marathon warrior and another former Women’s Running cover runner, Flanagan will toe the line in the 10,000m, where she holds the American record, at this year’s world champs. Finishing second to Molly Huddle (losing to her for the first time) at the U.S. championships, Flanagan also raced the 10K at the Stanford Invitational, just weeks before this year’s Boston Marathon. She ran a telling 31:09, proving her preparedness to tackle 26.2 barely two weeks later. She recently announced (no surprise) that she will be competing in the U.S. Olympic Trials Marathon next February. Update as of 8/27: Flanagan finished sixth in the 10,000m final, and Infeld paid credit to her training partner and mentor for all of her guidance after the race.

9. Nicole Tully. She won the 5,000m at the U.S. championships—and it was only her second time ever running a 5K on the track. This will be the first time that she, along with the other two qualifiers in her event (Abbey D’Agostino and Marielle Hall), will represent Team USA on the world stage. What’s more—Tully has a regular full-time job and is not a stranger to conference calls while prepping for a race. Update as of 8/27: Tully finished 8th in her heat, just sneaking into the 5k final. Watch her race on Sunday morning!

10. Brenda Martinez. Perhaps her most memorable accomplishment was winning the bronze at the 2013 world championships, becoming the first American woman ever to medal in the 800m. She will return to the world stage this year in the same event, along with Montaño. She placed second at the U.S. championships, and earlier this year, she ran the 1,600m leg of the distance medley relay to set a new indoor world record with her USA team at the New Balance Indoor Grand Prix. Update as of 8/27: An emotional finish during the semi-finals, Martinez walked away with 6th-place finish in her heat, with no Americans advancing to the finals.