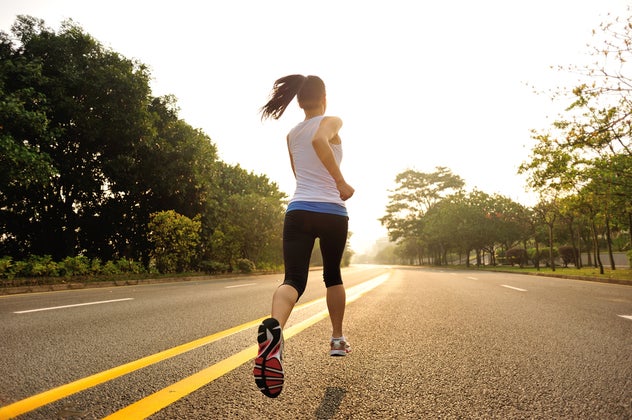 Remember when running the mile in gym class was the worst ten (maybe even 12 or even 15) minutes of your life? The stop-and-go, desperate plan to walk around corners, gasps for air—completing four laps around the track seemed like a journey to the end of the world. Now, as you lace up your new running shoes and make sure that eight-mile route is properly engrained in your memory, it’s hard to believe those days ever existed. At the same time, though, it’s also hard to accept the fact that you now choose to take on such lengthy feats.

You choose to set an alarm on a Saturday, and sprint up the hill outside your apartment window, past the buildings, sleeping neighbors and all your expectations, into a rhythm set in sync with the beat of your heart and the pounding soles of your shoes. While the worn out phrase “I’m not a runner,” may still lie stagnant on the tip of your tongue, there are certain realities, whether you want to believe them, or hold on to your former gym class-loathing self, that point to one truth, and one truth only—you are now, indeed, a runner.

For all you haters, wannabe slackers and non-believers, here are ten telltale signs that confirm you were born to cross that finish line.

You Dream Of Food

You know how your mind wanders when you go for a jog? It’s a great way to think—think about life, your current relationship status, imagine what your Friday night will look like, make a mental to-do list, plan out your next meal—yes, your next meal. Actually, food tends to sneak towards the forefront of your mind more often than not. You’re running to that big, juicy burger, those steaming hot fries, that topping-filled slice of pizza, and you’re using these scrumptious images to get you through the next mile, and the next, and the next. Sound familiar?

You Think You Can Run Faster than Cars

There may be a car quickly approaching, making its way up the hill, but you can outrun it. As a runner, you tend to believe you can outrun anything. You plunge into the road at any break in traffic there is, and may even witness a beep or two from drivers who don’t realize the true length of time your sprinting technique has left between you and their moving vehicle—plenty of time.

Rodents are Now Your Worst Enemy

You suddenly find yourself deathly afraid of dashing rodents, particularly squirrels and chipmunks. Clearly, the creatures have a lack of ability to logically reason when it comes to crossing the road. While road kill dotting the streets often adds obstacles to your path, it’s the living ones that truly increase the heart rate. Unable to make quick decisions in that acorn-sized head of theirs, squirrels and chipmunks bolt in front of pounding Brooks, Mizunos and Sauconys like there’s no tomorrow, and runners suffer the startling consequence.

You Take Pride In Your Desperate Need For A Pedicure

Runners take pride in their battle scars—the very proof of their persistence through calloused toes, blisters and of course, the infamous black toenail. Instead of hiding your feet in embarrassment, you flaunt them to all your friends, showing them the discolored nail on the brink of falling off, as they make plans for their next pedicure. You’ll make an appointment after training is over, and for your next race, realize that non-cotton socks and the proper shoe size can go a long way.

Every girl gets it. That moment when you realize not all the potential outfits you have carefully placed on your bed for vacation will fit into one suitcase. (Not to mention the shoes!) And so the arduous and sometimes devastating process of elimination begins. You have internal conversations with yourself, asking, Do I really need this? And promptly answering, You never know! It’s difficult to determine which items to forfeit, but you find yourself sure of one thing, no questions asked—the running shoes will definitely remain. Vacation is a runner’s playground, full of new turf to explore on foot, while taking in the scenery and passing by the time and miles at a seemingly record pace. Yes, sitting on the beach with a Piña Colada sounds amazing, but only after your morning run. Let the runner’s tan commence!

Your Shower Schedule Is Based On Your Running Schedule

The days of sticking to a strict shower routine are over. And if you’re that person who doesn’t like jogging in the morning but needs a shower to wake up, then chances are your daily cleanse has just increased to two. Your hygiene regimen is now dictated by your running regimen, and on your off days, you’ll find yourself wondering when to shower, procrastinating and sometimes even forgetting about it altogether. Lucky for your loved ones who are within close proximity, this only occurs once or twice per week.

You Have A Newfound Appreciation For Porta-Potties

You can see it in the distance. Or was that your imagination? The once dreaded porta-potty is now a glowing beacon—the light at the end of a long dark road that without a doubt, tests your control. There’s no denying that running shakes things up, sometimes surprising you on a long route with a sudden burst of desperation. And when you see that portable throne awaiting your entrance at an abandoned construction site or in a park or school, the feeling is often equivalent to the relief experienced when crossing that finish line.

You’ve Got The Runner’s Wave Down

To wave or not to wave—that is the question. The chances of crossing paths with a fellow runner are always high. Determined individuals of all ages and paces hit the streets every day, often lost in their own rhythmic trance. While passing traffic on a shared road doesn’t phase you, the emergence of another runner, clad in the same gear and maybe even the same shoes, kicks your heart rate up a notch, imposing the pressing question you both are wondering—To wave or not to wave? As you continue to approach, you may just find your hand naturally rising in a stiff, upright motion, resembling an awaiting high-five. It’s a wave without an actual wave, to be precise. Although skeptical at first, you now realize that this simple motion has the power to create a sudden burst of energy—a refreshing acknowledgment that, even though you may not run together, you are all in this together.

You Know The Runner’s High Is Real

We’ve all heard it before and most likely questioned its validity—the “runner’s high,” known for creating euphoric individuals after completing a long, and often intense, route. You know it when it happens. Your once-sluggish demeanor has now shifted to one of caffeinated rejuvenation. Unknowing witnesses look at you like you’re crazy as you describe this energizing post-run feeling, but you know it’s real. Having a bad day? A run can cure that. Want to have a productive day? A run can help with that. Trying to kick that mopey mood? A run is the best way to do that. As hard as it sometimes is to physically gear up and get your arms and legs pumping, the endorphin-filled aftermath is well worth it.

You Save All Of Your Race Bibs

It might seem just like a square of paper wrinkled with sweat to others, but to you, it’s an inspiring memento—a reminder that you were, and continue to be, part of something great. Your bib number is more than just identification. It distinguishes you as a runner, even if you still deny it. No matter how many thousands of people are in the race, there’s no such thing as a “fake runner.” Your division, your time, your splits, your pride—it exists in that one piece of paper pinned to the fabric of your beating chest. And when it comes time to celebrate and peel off your race attire, the bib is always carefully removed and smoothed out while reflecting on your personal achievement. Whether displayed on your wall, tucked away in a box, preserved in a scrapbook, or for the less organized, simply in a pile on your floor among other odds and ends, the bib remains. As they continue to accumulate, so does your confidence and need for more. And before you know it, regardless of your willingness to admit it, you’re hooked.