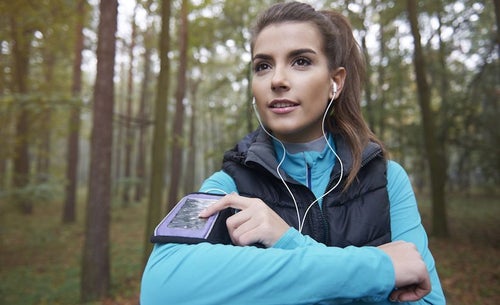 The appeal of cover songs in your workout mix is straightforward, since they balance the familiarity of the original tunes with the freshness of new perspectives. To illustrate this point, we’ve rounded up 10 remakes that present songs you probably know in versions you may have missed. With that in mind, let’s survey some upbeat updates.

The playlist kicks off with a heavy version of Ginuwine’s “Pony” and closes out with an urgent take on INXS’ “Need You Tonight.” In between, you’ll find a pop punk version of the sing-along favorite “500 Miles,” a horn-driven approach to “Come on Eileen” and an alternate reading of “Rock the Casbah” that extends its Arabic roots. Elsewhere in the mix, you’ll find the frontman of Nine Inch Nails and frontwoman of the Yeah Yeah Yeahs tackling Led Zeppelin, The Oak Ridge boys turning The White Stripes’ signature song into a country epic and a Passion Pit cover of The Cranberries’ “Dreams,” which feels even more poignant in the wake of singer Dolores O’Riordan’s recent passing.

When attempting a version of a song already held in high regard, one’s up against long odds. It’s tough to improve upon a track that’s already won folks over. To that end, we’ve favored recordings that aim mainly to provide perspective (rather than improvements) highlighting angles and elements different from those showcased in the originals. At the risk of sounding glib, it’s possible that—in the course of covering a song—one is actually uncovering it. To put this theory to the test on your next run, you can find our selections below.

To find more workout songs, folks can check out the free database at Run Hundred. Visitors can browse song selections there by genre, tempo and era to find the music that best fits their particular workout routine.

10 Soundtrack Singles To Score Your Next Run

Rock Your Run: 10 Recent Songs Above 145 Beats Per Minute